The Book That Plunged The World Into Madness

In 1922, just four years after the war to end all wars, an unknown Austrian then living in Bavaria planned a pamphlet to be called Settling Accounts.

In this SHOCKING HISTORICAL testament of EVIL, Hitler intended to attack the ineffectiveness of the dominant political parties in Germany which were opposed to the new National Socialists (Nazis). In November 1923, Adolf Hitler was jailed for the abortive Munich Beer Hall putsch along with men willing and able to assist him with his writing because…

With the help of these collaborators, chief among them Rudolf Hess, the pamphlet became a book. Settling Accounts became Mein Kampf, an unparalleled example of muddled economics and history, appalling bigotry, and an intense self-glorification of Adolf Hitler as the true founder and builder of the National Socialist movement…AND…

Ironically, and frighteningly, by the time Hitler came to power on January 30, 1933, what has been considered by many to be the most satanic book ever written was running neck and neck with the Bible at the top of the German bestseller lists.

We would be wrong in thinking that such a program, such a man, and such appalling consequences could not reappear in our world of the present. We cannot permit our selves the luxury of forgetting the tragedy of World War II or the man who, more than any other, fostered it.

Mein Kampf must be read and constantly remembered as a specimen of evil demagoguery that people whenever men grow tired of thinking and acting for themselves. Mein Kampf is a blueprint for the age of chaos. It transcends in historical importance any other book of the present generation.

We believe this book should stand as the complete, final, and definitive insight into Hitler’s own story of his life, his political philosophy, and his thwarted plans for world domination. A compilation of Hitler’s most famous prison writings of 1923… Mein Kampf is the bible of National Socialism and the blueprint for the Third Reich.

Take your experience beyond a mere e-book or boring video presentation because… Adolf Hitler Mein Kampf was developed using an exclusive licence from HyperMedia Interactive to bring you the very best possible experience anywhere.

Discover and unlock exclusive features not available anywhere else and get hours and hours of enjoyment unique to this product. All with the magic and advanced digital features of HyperMedia Interactive. 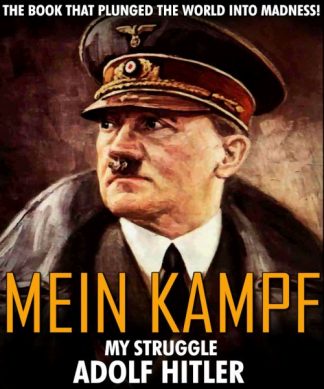